German IT Market In 12 Facts

Germany has been perceived as a leader in digital and technological spheres not only in Europe but worldwide. Let’s take a look at the key factors about the German ICT & IT market.

Note: ICT vs IT

ICT stands for Information & Communication Technologies, and the majority of sources refer to ICT when speaking about the main trends in the tech market. That makes sense, as IT and Communications sectors are both innovation-driven and interconnected ones. For example, modern telecommunications, such as mobile services, radio, and television use such technologies as artificial intelligence and robotics. That’s why ICT is sometimes used as a synonym to IT in terms of market analysis.

In our article we are using:

Germany is the largest software market in Europe

Germany constitutes around a quarter of the European software market by value, with the United Kingdom and France take second and third places. 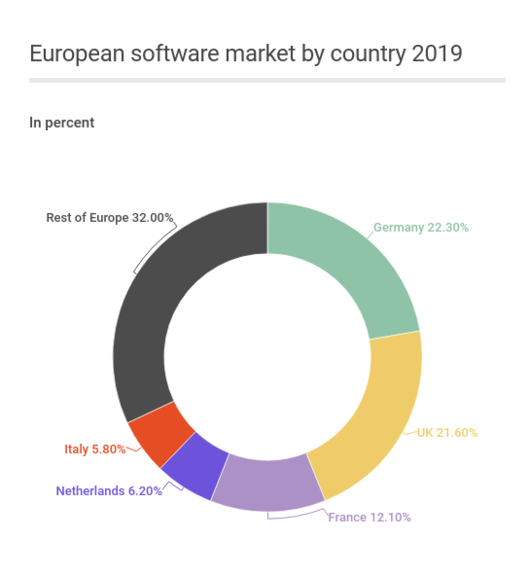 …and it keeps growing!

The software industry in Germany shows an annual year-on-year increase – from about 19 billion euros in 2014 to almost 25 billion in 2019. 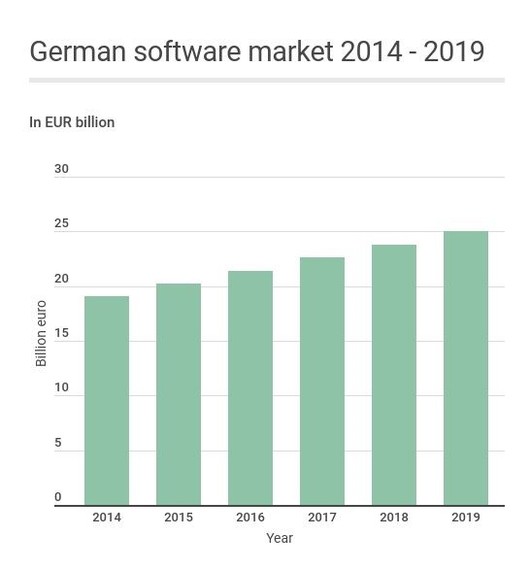 The ICT sector in Germany is the leader in investing in innovation. The companies invest a high percentage of their revenues in developing new technologies and creating brand new products. These significant investments are justified by the results – about 20 percent of the industry’s revenue is generated through product innovations. Innovation rate among German ICT companies, i.e. the percentage of companies that have introduced at least one new product or service in the last few years, is about 57 percent.

SME as a basis for tech growth

Speaking about the structure of the German ICT market it’s essentially to note that it has a strong basis in the form of small and medium-sized enterprises (SME) sector. In German, it is referred to as “Mittelstand”. The primary aim of SMEs in ICT is to drive demand for software solutions, creating, therefore, a significant customer base and generating more jobs for people. The German government supports Mittelstand and makes it resilient and stable.

Germany is the second-largest European market (5.9 billion euros) for security technology after the United Kingdom

The German security technologies market can be described by a high growth dynamic and constant change which is helping create numerous opportunities for investors and tech players. Germany’s IT Security market is expected to grow 9.2 percent year-on-year in 2018-2021, which is the most positive projection in Western Europe.

By 2020, the German cloud market is expected to be the largest one in the European Union, with constant year-on-year growth of 25 percent.

According to Germany’s Digital Association (BitKom), two of every three companies in the country apply cloud technologies in their activities. Cloud computing, along with Big Data and the Internet of Things (IoT), are locomotive technologies in fast digitalization of the whole of Germany’s economy. According to various estimations, the country’s cloud services market will become the largest one in Europe by 2020, leaving aside even the United Kingdom.

Germany is the second destination in Europe for tech talents

The German ICT is developing much faster than a number of traditional core sectors of the economy and therefore generates multiple jobs annually. As for 2019, the ICT industry employs about 1.1 million people in the country and has created approximately 150,000 new jobs over the past 5 years. In contrast, the country’s world-famous automotive industry provides jobs to about 840,000 people in the country. And the chemical industry employs a little over 450,000 people. 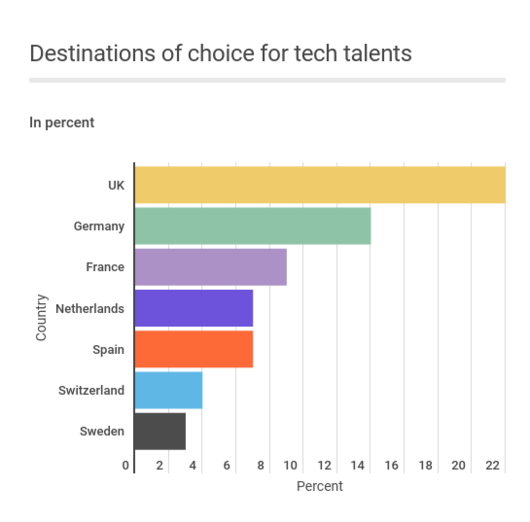 Germany’s ICT sector becomes more attractive for foreign investors, especially from Asian countries and the United States. Some of the most developed African countries are also picking up.

The whole amount of investments from the US, Asian countries and Africa to German tech in 2018 reached 1.8 billion euros in comparison with 400 million euros in 2014. Back in then, the United States was the main contributor putting almost all those 400 million alone, while now the US share increased to $1 billion out of 1.8 billion. 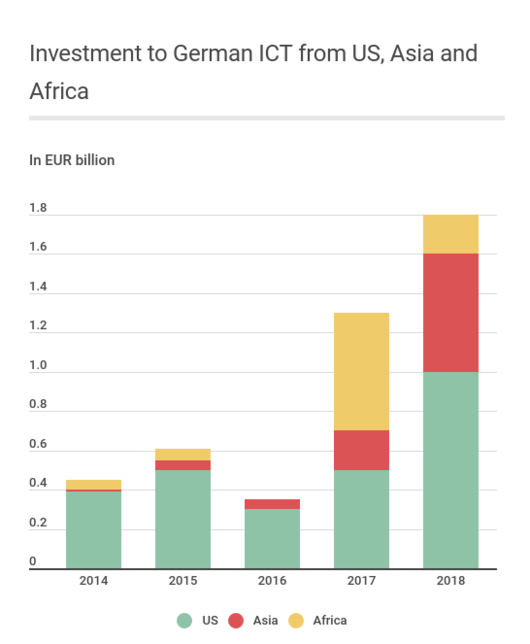 Support from the government and Digital Hub Initiative

The level of cooperation between business and government always determines digital economy growth rates and competitiveness of particular industries. In the case of Germany, smart government policies in the tech field provide support to the country’s ICT industry, fostering its development.

Three main focuses of the government’s role in the ICT sector:

As for now, the German government’s Digital Hub Initiative can be viewed as the most ambitious and resultative project. The German government’s Digital Hub Initiative is set to create Germany’s own Silicon Valley using own model for that. The initiative, launched in 2016, aims to increase connectivity and cooperation between 12 German tech and digital hubs (i.e. cities) and bring together different local competences drawing a broad picture of the country’s tech landscape. The Digital Hub Initiative goes the other way in comparison with the US experience of creating Silicon Valley, where the main national tech strengths are concentrated in one place. This high level of connectivity and consolidation prepares solid ground for further expansion of the German IT market and domination not only within the European tech stage but globally as well.

The German ICT sector accounts for the highest number of startups than in any other national industry. About 6,000 new innovative companies are created in Germany every year and the share of startups in the country’s economy as a whole is 4 percent. Over 6 percent of companies in the field were established in the period from 2015 to 2017. Only the financial & insurance, chemical & pharmaceutical sectors in the country have a similar startup rate. 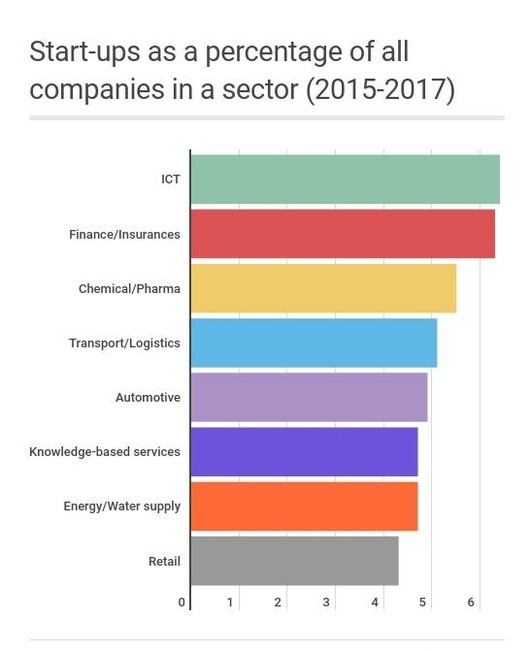 Berlin and Munich are the most attractive cities for tech talents

Berlin is the second largest European startup hub – second only to London. According to recent research by Deloitte, Berlin, along with another tech-hub Munich constitutes the so-called “Big-2” – the most attractive cities for tech talents and entrepreneurs. These two cities are locomotives of Germany’s ICT sector and boast the highest number of tech startups.

Germany is the “unicorn” country

One of the reliable indicators of the country’s tech hub’s ability to support hyper-growth, attract top talent and create a new generation of future founders, executives, and angel investors is a number of the so-called “unicorns” in the tech industry, i.e. companies which values have recently exceeded $1 billion.

Germany firmly ranks second by a number of unicorns, well ahead of Israel, Netherlands, Sweden, and France following only the United Kingdom. 28 unicorns were created in Germany since 2008, while nine of them reached $1 billion thresholds in 2018 alone, including such companies as NuCom Group, AboutYou, Omio (GoEuro), Hypoport, Biontech, etc. 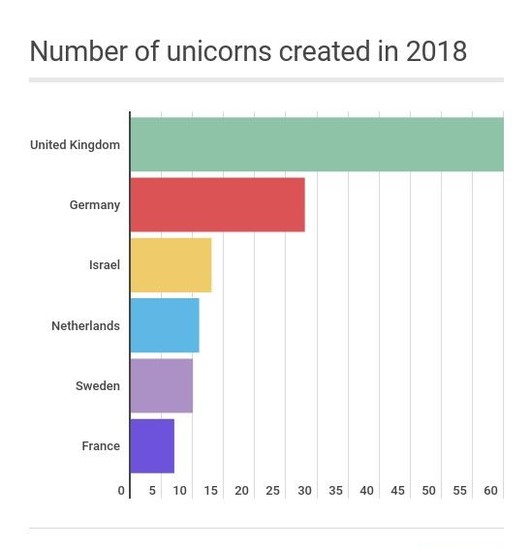 According to the State of European Tech report 2018, “Germany and the United Kingdom are now the joint top destinations for migratory tech talent moving within the European tech industry.” This flow will unlikely to weaken, as Germany’s tech market needs more talents, while IT professionals from all over the world match this need and are attracted by higher wages, increased career opportunities and perks of living in one of the most economically developed countries in the world. So this is the right place to relocate to find new challenges.

If you are interested to relocate, please, check our Job Opportunities 🙂